​Words from a Friend

In the past year, my life and outlook on my life has changed. On January 2, 1997, a good friend of mine tragically ended his life. Robbie Kirkland, fourteen year- old freshman at Saint Ignatius High School, shot himself with the hope that he would find peace and happiness in death that he couldn't find in life. You see, Robbie was gay. He could not live knowing that he was gay in a homophobic society. It was unacceptable and impossible for Robbie to continue to live his life lying to everyone, but he did not feel that it was even thinkable to tell anyone his secret. He saw no other way out, so he killed himself. 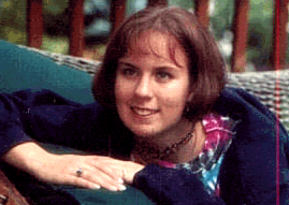 Robbie's suicide has affected me in so many ways than I could ever have imagined. Looking at pictures of Robbie and reading letters from him help me to remember all of the fun times we had together at Camp Christopher. I replay in my mind our conversations from phone calls and camp, and wish I could talk to him just one more time to tell him how I care. I think about him throughout the day, and carry with me everywhere I go a poem that reminds me of Robbie. I keep pictures of him in the glove compartment of my car and I wear the necklace he made me during Arts and Crafts at camp all the time. Every time I experience something new, I think to myself, "Robbie never got a chance to do this." I have also become incredibly aware of what I say and how it might hurt someone.

Almost everyone I know uses the phrase "This is so gay" when he or she does not like a particular situation or thinks something is unfair. Teenagers use the phrase commonly and easily, without thinkingabout how offensive it is. I try to have a more open mind now. I have decided that no matter what, I will give everyone a chance and I won't pre-judge anyone. I am also more sensitive to gay jokes and comments than ever before, since January, I have realized just how much I value all my friends. They are so important to me and are such a big part of my life. It makes me so sad to hear people talking about suicide. Everyone's life means something, and there is always someone who cares. I value my life now much more than I used to. I try to do as much as I can and attempt to be the best person I can possible be. I really think about everything I say and try not to hurt anyone, either directly or indirectly.

When I first found out about Robbie's death, my mind did not really understand or accept the fact that he is gone for good and I will never have the opportunity to hug him or talk to him again. It took a few weeks to hit me, and when it did, I cried my eyes out for hours. I was shocked someone that I knew, that I cared about, was dead. For a couple of months, I was extremely confused about his death. I guess I just didn't understand how someone could kill themselves. Talking to my friends and writing down my thoughts and feelings really helped me to cope with Robby's suicide. I still deal with it everyday, though, and little things can set off a wave of tears. I don't fear death anymore, if I ever did. I know that Robbie is happy now, and when I die I will be happy too. I also know that Robbie is always with me.

To quote his mom, Leslie Sadasivan, she and I and everyone who knew Robbie need to "remember that our Robbie is up there helping all of us."

Here it is, 9+ years after a friend killed himself, and my life is vastly different. I am at a place in my life that I never thought I would reach...that I couldn't even envision when I was younger.

I can pinpoint January 2, 1997 as the day my life changed. January 2, 1997 is the day a friend - a good, caring person - killed himself. I consider myself to be lucky to have known Robbie Kirkland during his short life. I still mourn for the life that he gave up, the life that he ended. I mourn for all the others out there *just like him* who can share the turmoil and desperation that I now know Robbie felt. That is the greatest irony of all - that Robbie killed himself because he felt alone...he felt different...he felt lonely. If only he knew how many people cared about him, how many people loved him, how many people would have supported him if he had been open and honest with others. If only he knew how many others are out there that are *just like him*.

In the matter of a few short months - between the time of his death and the time that his story was released to his friends and to the public - my life changed. It didn't seem fair to me at the age of 16 that someone my age, someone I was friends with, would feel desperate enough to kill himself.

All of this is easy to say in hindsight, but had you asked me 8 years ago - I would never have been able to articulate these feelings, emotions or thoughts.

I took Robbie's death hard. I felt alone, sad, depressed - but I was lucky enough to have the support of friends to lean on to bring me back up. I found comfort in Robbie's mom, Leslie, and found little ways to keep Robbie alive in my heart and mind. I thought of him often, and still do. I made a decision though - if I could touch just one life, one "Robbie", and make a difference to just one person - his death wouldn't be in vain. I found myself wanting to reach out to all the people I could and comfort them, to let them know that someone cared.

I can look at myself now and say that I am unjudgemental and open to diversity. I can even say that I like myself. I am being the best person I can be. I know myself, I trust myself, and I give myself the respect that I deserve. It took me years to reach this point, and I am thankful that I did reach it (especially since I know so many people who don't like themselves). I can truly say that Robbie's life and death made me who I am today. It is sad that something so tragic and devastating happened to make me "wake up". I hope that Robbie's suicide has affected others as well, and inspired others to be better people. You never know what would have happened if something went differently in the past...but I do know that I wouldn't be half the person I am today if Robbie weren't a part of my life.

So, Robbie, wherever you are - I thank you, and I am proud to call you a friend.