We consider the last 9 months of his life as a gift from God. Obviously, we wish that the gift would have been that Robbie had lived but it wasn't to be. So we look instead at God's gifts to us. During those 9 months, we knew that Robbie was definitely gay and Robbie knew how much we loved, supported, and accepted him. We truly celebrated his being gay even though he could not. I gave him literature on homosexuality and told him of gay movies to watch. One that we both enjoyed was Home for the Holidays. We both laughed and he commented on the positive portrayal of homosexuals in the movie. We discussed the hard road ahead of him as a gay person in a society that does homosexuals and their lifestyles. I reassured him that when he found his special partner that they both would be welcome in our home. In those last months, he experienced our love, and at the same time he understood our anguish and fear about his unhappiness and inability to cope with being gay.

Our Gay Pride Day in Cleveland on June 26, 1997 was dedicated to Robbie's memory. I gave a speech about Robbie and the importance of being out and proud. I proudly marched with PFLAG in loving memory of my beloved gentle son. Even though he could not be out and proud I was. I felt my special angel watching over me smiling with approval.

I miss my darling son but I find comfort knowing that he is with the angels now. He left an enduring mark in our lives with his love, laughter, wit, and creativity. He wanted to be a writer, he left many of his writings behind for us to enjoy and appreciate his special gift of writing. I end this with a carefree poem that Robbie wrote. It reflects his spirit and joy of his life. 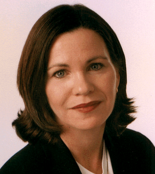 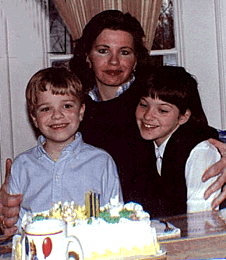 "I may be gone, but I hope I'm not forgotten. Remember me."

This is what my gay 14 yr. old son wrote in a poem and in his suicide note. I hope that by writing about him, his brief life will not only by remembered, but celebrated as well.

Robbie was truly a gift from God. I almost miscarried him and felt so blessed when he was finally born healthy after a very difficult pregnancy. I always told him how blessed I felt to have him. He was a loving sensitive, shy boy. Around our family he was outgoing and constantly amused us with his witty sense of humor. Although he felt rejected by others, Robbie accepted everyone for who they were, even though he experienced intolerance at many levels. The comforting words, written by a classmate in a sympathy card, best describe him: "He was so kind, loyal, and always accepting of everyone. Robbie was different from the other boys in that he was sensitive to other people's feelings, and because of this he would never intentionally hurt anyone!"

Although his life as a gay youth was painful and full of struggle, he did find bright patches of happiness and contentment, summer camp was one of them. Robbie attended a Catholic summer camp for 2 weeks every summer. There he felt happy and accepted, and made friends that he kept in touch with through the years. A short poem he wrote about camp reflects that joy.

Camp
I love it
cabins and counselors
fishing and friends
it seems the fun never ends
swimming, boating,
bonfires too
you can't get bored, there's so much to do
camp, I love it.

This is something which I wrote to celebrate Robbie's life... 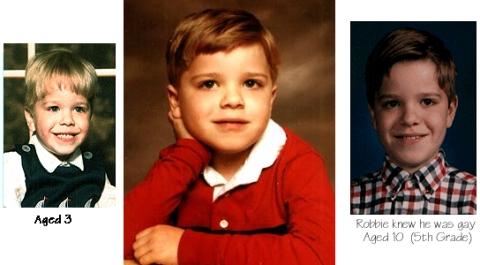