We had found a suicide note while he was gone. Around the time we found the gay porno pictures, he had attempted suicide by taking a bottle of Tylenol which he vomited a few hours later. In the note he wrote "I fear for my life" and "I fear on line." I believe this is a reference to the man blackmailing him and other sexual predators that he encountered on line. In the ensuing last 9 months of Robbie�s life, he would make a few successful attempts to go back online without our permission or knowledge. It was obvious that despite his negative experiences on line, he found many positive resources through the Internet.

The Internet was a very important life line for Robbie.

Because he was so closeted with our family and his friends, it provided him a "safe" place to be out and meet others like him. What a heartwarming feeling it must have been for him to connect with other teens who were gay. Due to being closeted, he did not know that there were other teens experiencing the same range of emotions as him. On line he also found gay websites, gay chat rooms, and a wealth of gay related resources. After his death, I met several gay males who had befriended him on line. They told me that he was very funny, entertaining, and a creative writer. He shared how unhappy he was to be gay and the difficulties he faced as a closeted gay youth at school. Of course, I am touched to know that others tried to help him and offered him friendship and support.

I am sure that he was also looking for romance on line. Being closeted restricted him from the normal adolescent experience of dating and romance. On line has many youth in the same predicament but unfortunately it also has sexual predators posing as innocent youth. By running away to Chicago, he was expecting to connect with someone who loved him and was offering him an escape from his pain and isolation.

Fortunately, he realized the danger before he arrived. He also had another encounter with a sexual predator from Pennsylvania. The man sent him a gay porno video tape and asked him to send him a video of him naked in return. I found the movie the man had sent and the envelope he had sent it in. Robbie had no intention of doing as the man asked but was fearful that the man would come after him because he had our address. Robbie's father informed the local FBI office and police of this man's address and actions. It turned out that this individual was a high school guidance counselor.

Another negative aspect of the Internet is that it exposes gay youth to hard-core pornography and unhealthy views of the gay community. It gives the impression that being gay is all about sex.

Adolescence is a time of raging hormones so gay youth can't help but be curious and gravitate to on line pornography. Despite the dangers that Robbie encountered, I still believe that the Internet is a wonderful resource for gay youth. Obviously, parents should closely monitor and supervise their children on line and put a block on pornography sites. Educating them about the dangers as well as the variety of resources the Internet offers is paramount. It is important to establish an ongoing dialogue with your child about the Internet. Of course monitoring a gay youth who is not out to his/her family will inhibit him/her from going to gay websites, for fear of discovery by his/her family. I regret that I prohibited Robbie from the one place that he did not have to be closeted, where people accepted him for who he was, and shared his pain and struggle. The irony of all this is that I now depend on the Internet to keep current on gay news and connect with other activists. Several newspaper articles about Robbie's struggle are posted at various websites. I am sure that Robbie is touched that his story is on the medium which he so loved. Now others like him might read it and see hope, knowing that they are not alone in their struggle and try to get help instead of giving up on life like Robbie did. I am thankful that the Internet was there for Robbie in many positives ways, but I am especially thankful because without the Internet we never would have found out that Robbie was gay. The thought that he might have died without us ever having the chance to reassure him of our love, support, and acceptance of his homosexuality would have been even harder for me to live with.

The Internet played both a positive and a negative role in Robbie's pained life. I have very mixed and bittersweet feelings towards the Internet. Overall, I would say that it was more of a positive resource for Robbie than a negative, despite the dangers he encountered. When we signed on to AOL in Jan. of 1996, 1 year before his suicide, he was ecstatic.

We did not yet know that he was gay. We warned him of the many dangers on line such as sexual predators and pornographic sites, and he reassured us that he was too smart for something like that and would use extreme caution on line.

Since he had always been very responsible and trustworthy we did not closely monitor him. His joy and eagerness to go on line warmed my heart. He said that he was talking to friends in teen chat rooms, playing games, and obtaining information for school work. We restricted his time online because AOL was charging an hourly rate in those days. When the first bill arrived we were shocked to see how much he had disobeyed us. He apologized, saying how easy it was to lose track of time and to accumulate time waiting for sites to download and writing email. We restricted and supervised his time more closely. During the second month of on line service, my husband found some files of gay pornography, which Robbie tearfully apologized for telling us that someone threatened to blackmail him if he did not save the pictures for him. He was very frightened and sincere. We asked him if he was gay and reassured him of our love, support, and acceptance. He vehemently denied it, repeating that he only had the pictures because he was afraid of this man's threats. We believed him, although we did still suspect that he might be gay. A few weeks later, he ran away from our Cleveland home to Chicago, by bus, to meet a man he had befriended on line. This was so uncharacteristic of him because he was not streetsmart and had been protected and sheltered all of his life. When I realized that he was gone, I had visions of him dead or forced into a life of teen prostitution or pornography.

I just knew that he went to someone he had met on line. When he arrived in Chicago, he got scared and realized that he had made a mistake. A homeless man helped him find a policeman to turn himself in. I was called at 3AM after what I thought was the worst day of my entire life, little did I know what the future held. I was relieved and thankful to God to hear that Robbie was safe. We found this person's pager number with Robbie's belongings. His father, who is an FBI agent, investigated the number but it was not working. We immediately took Robbie to a counselor, who with Robbie's permission, confirmed our suspicions that he was gay.

Once again we reassured him of our love, support, and acceptance. We, of course, canceled our AOL account. 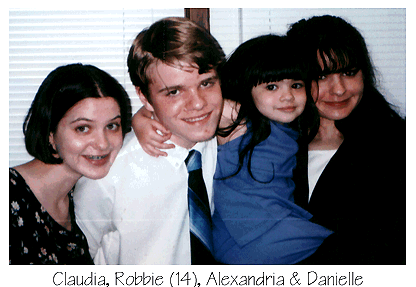 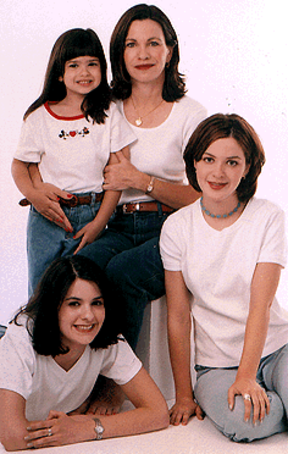 On Jan. 2, 1997, my darling 14 year old son, Robbie Kirkland committed suicide after a 4 year struggle to accept and find peace with his homosexuality.

Our family loved, supported, and accepted him but could not protect him from the rejection and harassment he experienced at his Catholic schools or his overall perception of how society and religion view homosexuality. Robbie, my only son, was a very special and loving person. He was kind and sensitive with a witty sense of humor. He loved writing and had dreams of being a writer.

At an early age Robbie was teased and harassed because he was noticeably different from the other boys.

Robbie was soft spoken, gentle, creative, and disliked sports. Robbie made many efforts to fit in with the other boys such as participating in sports and pretending to have crushes on girls. It wasn't enough. He was still perceived as gay and encountered teasing and harassment, usually out of the teacher's view.

Over a period of time, the effects of homophobia he encountered at school, left him feeling ashamed, isolated, and insecure.

He was not happy to be gay, knowing how much his Catholic schoolmates, society, and the Catholic doctrine rejected homosexuality.